My K-1 Box 20 says see statement, and then the statement says:

Description (and has numbers for each):

The ordinary and Self Employment numbers are the same, and slightly higher than the W-2 wages.

What do I enter in the box on Turbo Tax, or do I select Z three times and enter all three?

Please see screenshots below. You will be asked a series of questions that you can answer based on the Schedule K-1 you received. There should be a statement attached that will provide you with the information you need to answer the questions. 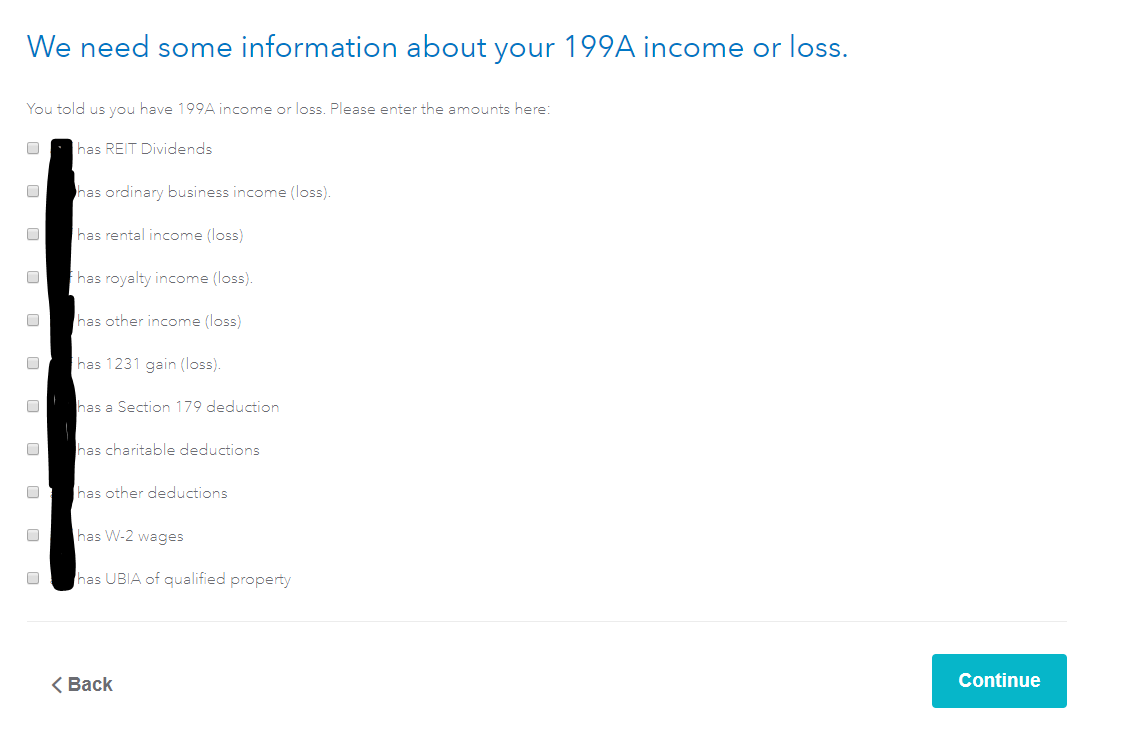 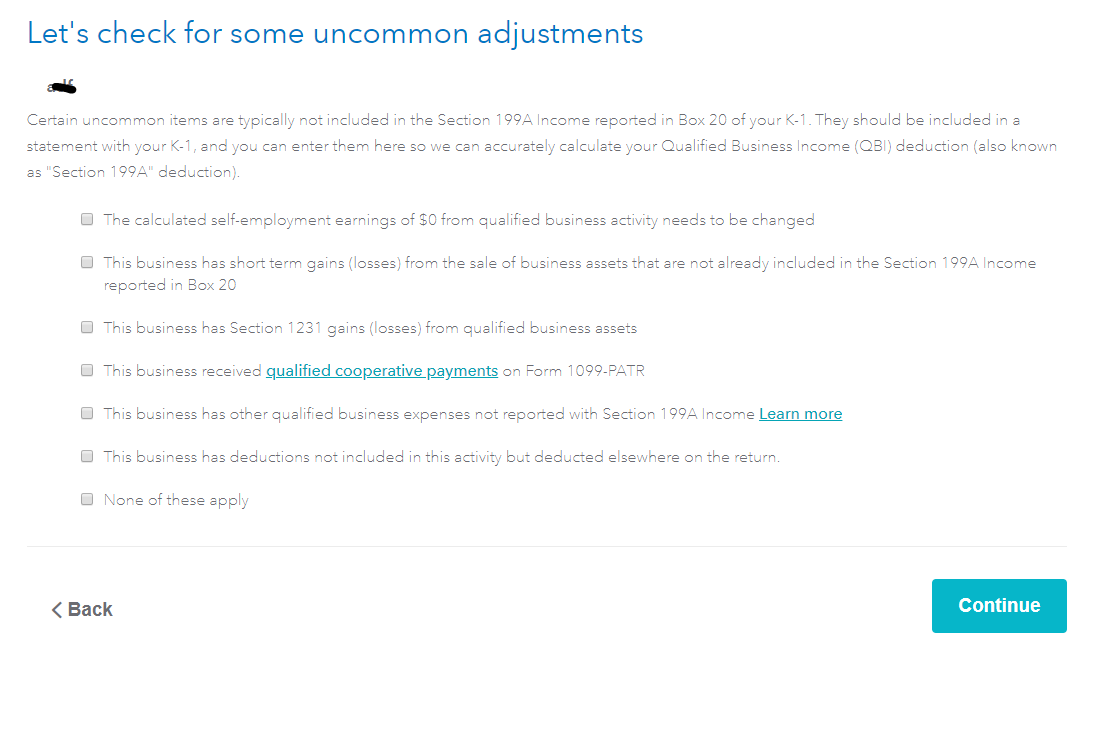 Apparently, your answer needs to be YES at the screen above, "We're almost done" which would be that your taxable income might exceed a threshold. If you were to answer no, you would not be providing the details requested that appear to be generating the error.

See below for the next screen after answering YES. There are intricacies to the Section 199A that TurboTax needs to calculate based on your details. Answer the questions depending on your circumstances. 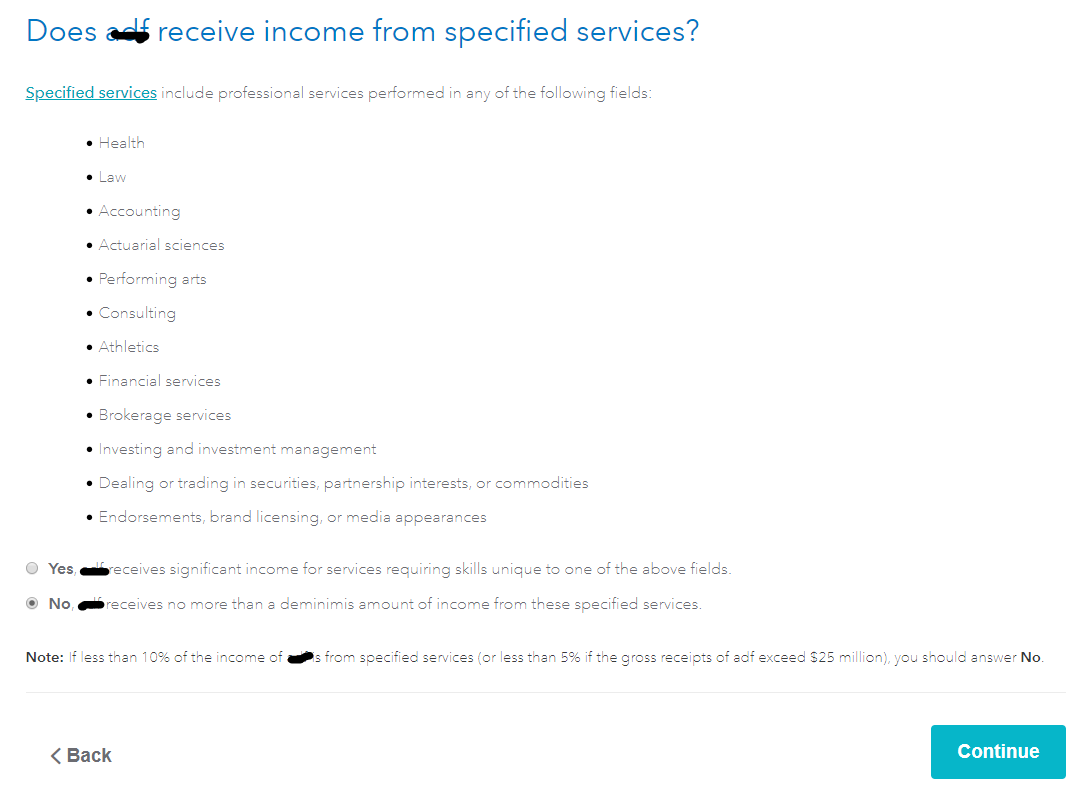 Continue on through the questions.

TTAX BUSINESS appears to have a bug here. I have an LLC ("LLC A") that owns a portion of LLC B. The K-1 that LLC A received from LLC B contains Statement A information for completion of Sec 199A reporting, tied to Box 20 Code Z on the LLC B K-1 provided to LLC A.

In TTAX BUSINESS, when entering BOX 20 information, there's a box that says: "NOTE: Check this box if you have entities with codes of Z [etc]. We'll have you enter those on the next screen." But when I check that box and click continue, TTAX sends me back to the K-1 summary screen, not to another screen to fill in the code Z Sec 199A details.

BUG? How to report??

I have the same problem.  Is this a glitch in the program?  Does anyone know a work around?

Hey JimmyJ1, Did you get or find an answer to your question?  I have the same question, my Partner's Section 199A Information Worksheet (I got that instead of a Statement A) has multiple columns of information, pertaining to the income items from each property (the LLC owns multiple properties being rented out to the same business that is NOT owned by the LLC).  I saw one person in a post say he totaled each column manually and just entered that amount, although he didn't say a TT support person recommended that.  I saw another post say to enter separate Code Z's for each Column and TT will calculate the amount.  I also am not sure how to answer the very first question, "Is the business that generated the Section 199a income a separate business owned by the partnership?".  I'm certain it is not, but then the buttons to check corresponding to that question is "The income comes from another business".  That's different from "a separate business OWNED BY THE PARTNERSHIP.  So I'm not sure how to answer that question.

All that having been said, when you get to the Section 199-A Statement information, you can add it together within those same categories used to "split" the K-1 (generated by the partnership vs passed through to the partnership, and type of activity).

If your partnership has no pass-through QBI, and only one type of activity, you can add the amounts on the Section 199-A Statement together to enter into the TurboTax "Section 199-A" information screens.

**Say "Thanks" by clicking the thumb icon in a post
**Mark the post that answers your question by clicking on "Mark as Best Answer"
2
2
10,174
Reply

You can enter Section 199-A Statement associated with box 20 code z in TurboTax Business Forms mode.

For a K-1 received by a partnership preparing Form 1065, go to Forms mode (icon at top right in blue bar) and in the left column find the "K-1 Partner" form for the K-1 the partnership received.  Click on that K-1 Partner form and it will open up in the window.  Scroll down to Section A and in the applicable boxes enter the information on  the "box 20 code Z Section 199A Statement or "STMT" that came with that K-1.

**Say "Thanks" by clicking the thumb icon in a post
**Mark the post that answers your question by clicking on "Mark as Best Answer"
1
10,172
Reply

I too have an amount for box 20 code Z on my MLP K-1 and after reading the PTP IRS instructions for code Z it appears that one must file form 8995. Is that the accepted process for those using TT to enter this info? Below is the IRS explanation around code Z for tax year 2019:

On my K-1 the partner instructions page specifically says that one should claim code Z deductions:

I'm deep into it and am trying to figure out what I've been given and what not.  I have the K-1 and I have something called K-1 Supplemental Information.  The SI provides a description for 20Z that says it's 199A PTP Income (Loss), but doesn't provide any additional detail that appears to be necessary to allow me to complete the questionnaire.  Should I be asking for something else from the PTP, and, if so, what is it?

Enter the code Z when you enter the K-1 box 20 screen, but you don't need to enter an amount on that screen.  Continue on, and you'll eventually find the screen  "We need some more information about your 199A income or loss".  When you check the box next to a category on that screen, a place will open up to enter the amounts from the Statement or STMT that came with your K-1.  The applicable category (or categories) on this screen (and the following "Let's check for some uncommon adjustments" screen, if applicable) must be completed in order for your K-1 QBI information to be correctly input into TurboTax.

**Say "Thanks" by clicking the thumb icon in a post
**Mark the post that answers your question by clicking on "Mark as Best Answer"
1
6,489
Reply

Did this get answered?  I recieved a K-1 where there were multiple QBI entities listed, but TurboTax only permits one.  Do I really have to do multiple K-1 reports just to record these?

During the first part of the K-1 entry, all the separate K-1s use the name, address, and EIN of the "main" partnership shown on the K-1 you actually received.  In other words, enter each additional Schedule K-1 just like the first through Part II Line I (India), and the appropriate at-risk answer under Line K.  You don't need to enter the partner share percentages or the partner capital account amounts on the additional K-1s.

**Say "Thanks" by clicking the thumb icon in a post
**Mark the post that answers your question by clicking on "Mark as Best Answer"
0
5,198
Reply

I think there is a much simpler fix than described in many of the previous answers, that does not require splitting into separate schedule K-1s.

All I did was open the Schedule K-1 form, scroll down to Section D1 (entitled "Qualified Business Income Deduction - Statement A Information"), and fill in the first table there. Just above the table is a line saying, "Shareholder's share of QBI or qualified PTP items subject to shareholder specific determinations". In my case, I simply needed to supply a number for "Ordinary business income (loss)" in the first line of the table, which I took as the value of Box 1 in Part 3 earlier in the Schedule. Re-ran TurboTax check, and it passed! My refund went up a bit too. 🙂

I believe this is the correct table to fill in to correct the error, because if you look at a paper version of 199A Worksheet, at the top there is a Statement A, and the lines there match the entries in the Turbotax Section D1 of Schedule K-1.

Took me over an hour to figure that out. You. Are. Welcome!