The process is similar for TurboTax Online and TurboTax Desktop. In Personal Income, click Dividends on 1099-DIV under Interest and Dividends.

In the online version, this is how it is entered: 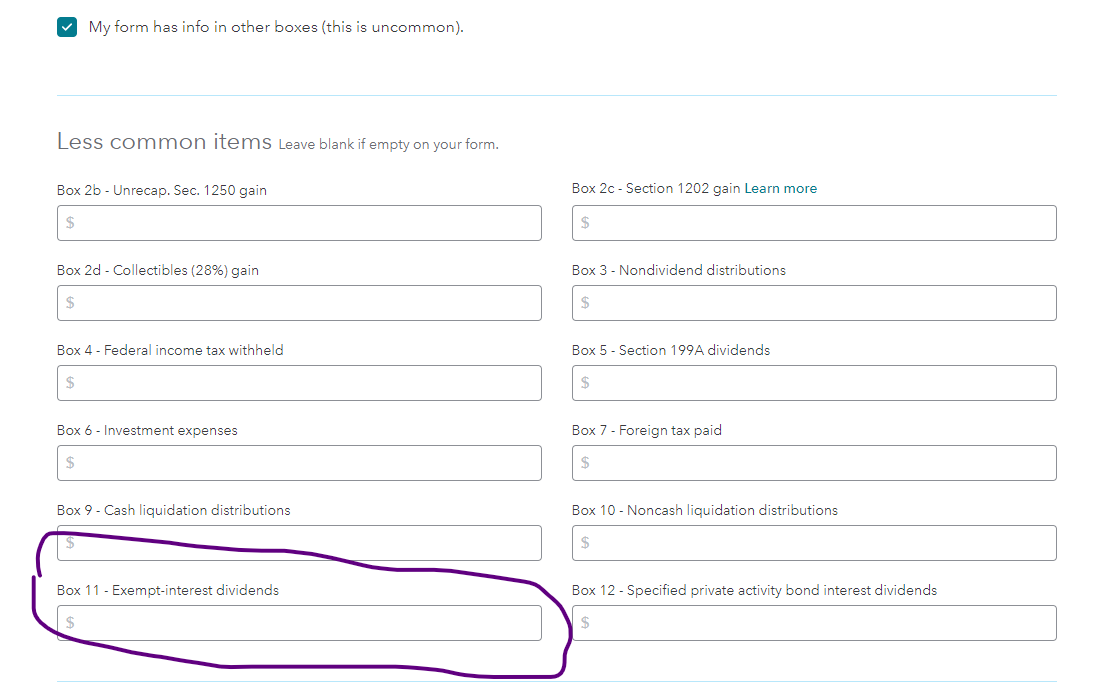 You will be asked what state the tax exempt dividends are from.

However...there is a BUG in the online software if that is the only box you are entering $$ for.

(haven't tested all the other boxes yet)

____________*Answers are correct to the best of my knowledge when posted, but should not be considered to be legal or official tax advice.*
0
198
Reply

I had tried this in Desktop and there is not a problem with that entry. But, then I tested it in online and see that tax exempt dividends can't be entered unless there is a $0 in box 1a. I'll report this.

Another TTX Expert in a different post said they are reporting this....(at least I thought so....now I can't find it.)

There is, Now, also this FAQ which seems to imply it's being worked on...though it doesn't give the workaround...so maybe report it anyhow.

Figure that one out?

I am just amused !

____________*Answers are correct to the best of my knowledge when posted, but should not be considered to be legal or official tax advice.*
0
194
Reply

I entered $0 in box 1a and it still did not work. Got a message that said "Box 1b should be less than or equal to Box 1a". I give up, not using Turbo Tax !

...if 1b was bank before ....maybe they were working on a software fix to the 1a issue, but it introduced a second requirement.

That's life.  I never fully expect the software to be working properly in all sections until March .  This year is worse because of the Ridiculously Late bill passed in DC, which took away significant resources to correct normal minor bugs.

Do what you think is best for YOU.

____________*Answers are correct to the best of my knowledge when posted, but should not be considered to be legal or official tax advice.*
0
174
Reply