Since I used std mileage, I never put the purchase price of the car in the expenses.  why is there a gain now?
Topics:
0
3
237
Reply
3 Replies

If you fully depreciated the vehicle, your gain will be the sales amount less costs of sale.

When you go through the sales routine in TurboTax it should have asked you for the depreciation equivalence amount based on the miles you deducted during the period of time you used the vehicle for business purposes. You have to factor the depreciation into the sale for gain or loss purposes.

The cost basis of the vehicle will be the original cost less depreciation. Here is a table of the depreciation cost per mile, just multiply your business miles by the factor for the applicable years and you will have the depreciation for that year: 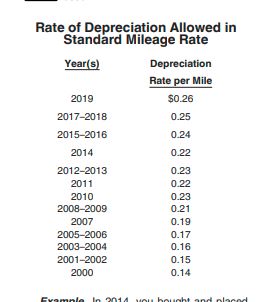 The standard mileage rate includes an allowance for depreciation, it always has.  About 25 cents out of the 58 cents is for depreciation.  At 30,000 miles, you claimed about $17,000 of deductible business expenses for the car, of which about $7500 was deprecation.  Since you claimed more depreciation than the car cost, it's depreciated value is $0.  That makes the entire selling price a capital gain for the business, and you have to pay tax on the depreciation you previously took.

Let me try another example.  A bakery buys an industrial mixer for $1000 with a 5 year life.  Every year for the first 5 years they deduct $200 as a business expense for depreciation on the mixer.  In year 6, they sell it for $200.  Since they fully deducted the cost before, if they were also allowed to sell it tax-free, they would have gotten a $1200 deduction for something that only cost $1000.  So instead, they have to recapture the depreciation they claimed that is now being paid back by the sale of the used mixer.  Since the mixer is fully depreciated and has a "book value" of zero, selling it for more than book value is taxable income, just like selling bread for $1 that cost $0.20 to make is taxable income.

Your car is the same.  You have fully deducted the price of the car as a business expense over the past 2 years.  So anything you get for selling it is a reimbursement of a previous deduction. You have to pay tax on that.

*Answers are correct to the best of my ability at the time of posting but do not constitute legal or tax advice.*
0
224
Reply