I did Aggregate in 2018. I have been able to receive the correct QBI deduction this year.

However my form 8995 -A schedule B does not look correct.

In item 3 Name of trade or business -Only one entity is listed 2x .

It does not show the 2 entities that are being aggregated.

Thanks for your help.

For Publicly Traded Partnership (PTP) QBI, you need to make certain selections in TurboTax, and those selection depend on whether the partnership generating your K-1 is itself a PTP, or if instead it merely got PTP income (loss) as a passthrough from another PTP.

If your K-1 is from partnership that is itself a PTP, you should designate it as such during the K-1 entry.  Don't enter an amount on the screen where you enter the code Z, just Continue after you enter the code Z.  Then, when you get to the Section 199A "We need some more information about your 199A income" screen, select the box next to the type of income that partnership generated (ordinary, rental, other, royalty, other as reported in box 1, 2, 3, or 7).  In the box that opens up, enter your PTP loss amount as a negative number.

If your K-1 is from a partnership that is not a PTP, but is passing through PTP loss, when you get to the screen "We see you have Section 199A income", you make the selection "The income comes from another business" and then under that "The other business is a publicly traded partnership".  When you do that, instructions for what you need to do will pop up on that screen.  I show a screenshot below, but basically you will need to subtract the PTP passthrough loss from that K-1, and enter a new, separate, K-1 to report only the PTP passthrough loss.

Here is the screenshot of how you designate the K-1 you received (or the new, separate K-1 you must enter, if applicable): 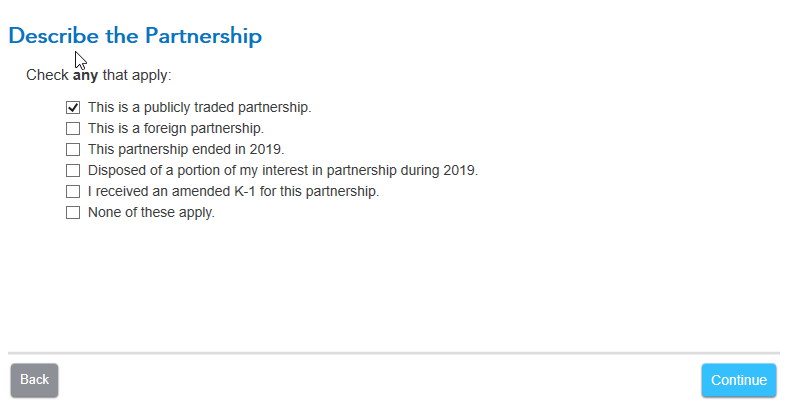 And here is the screenshot of how to enter that your PTP loss was a passthrough from another PTP: 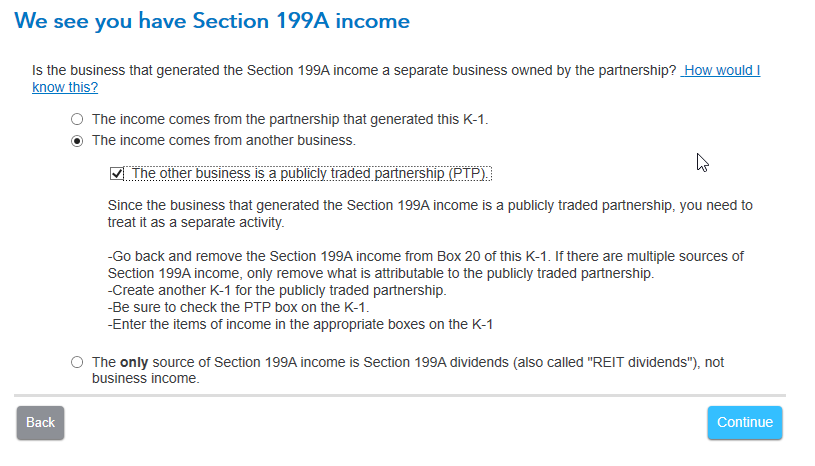 **Say "Thanks" by clicking the thumb icon in a post
**Mark the post that answers your question by clicking on "Mark as Best Answer"
0
1,196
Reply
Highlighted

It would be helpful to have a TurboTax ".tax2019" file that is experiencing this issue.  You can send us a “diagnostic” file that has your “numbers” but not your personal information.  That may help diagnose the issue.  If you would like to do this, here are the instructions:

For TurboTax Online, click the dropdown arrow next to Tax Tools on the left menu panel, then click Tools under that.  On the Tools Center pop-up, select Share my file with Agent.  When you confirm the request, you will get a box with a token number.   Reply with the token number and I’ll be able to open a TurboTax tax return with your numbers but not your personal information.

For TurboTax Download/CD, on your menu bar at the very top, click “Online” and then “Send Tax File to Agent”.  When you click to send, you will get a pop-up with the token number.  Reply with the token number and I’ll be able to open a TurboTax tax return with your numbers but not your personal information.

**Say "Thanks" by clicking the thumb icon in a post
**Mark the post that answers your question by clicking on "Mark as Best Answer"
0
1,194
Reply
Highlighted

So just ignore the errors, skip and print and mail?  FortFun's posted solution is ineffective -- it does NOT generate a Statement A.  The QuickZoom for Z doesn't even work either.

Aha, giving it a $0 business income/loss on the 199A income or loss info screen will force it to generate the Statement A.

I have Statement A that has a number for "UBIA of qualified property" and enter the amount. I still get a error message that information has not been entered for Statement A. However, the number shows up during the review. I have read all the earlier replies but must be missing something. If I leave the first opportunity to enter a number for Code Z blank, nothing shows up during the review so I have entered in both places.

Thank you so much @DavidS127.  The explanation and screen shots were extremely helpful to get me going in the right direction related how to enter information for code Z in Box 20.  I did get a screen with boxes.  However, I still have some confusion.  Attached is an image of a portion of the statement with my K-1.  The blurred out portions are just the name of the "business" to protect privacy in a way and because I don't think it's pertinent to my questions.  However, showing the image here will hopefully help make my questions clearer.

question 1) noted in blue box - the description says it's for code AH but indicates information relates to codes Z, AA and AB.   Box 20 of the K-1 itself has codes Z and AH noted to see statement; there is no code AA or AB in box 20 on my K-1.  Could this be more of a "general" thing like in case I also had AA or AB?  Or do I need to be looking for somewhere in TurboTax to enter information related to AA and AB?

question 2) noted in purple box - what are these numbers?  TurboTax seemed to pull part of them in for code AH but not all of them.  Do I add labels/descriptions in TT for the ones it didn't add.   When I got to the boxes for code Z it pulled in 75 (from the 1 and 74 labeled UBIA).  But the section 199A worksheeet I was entering numbers for code Z had an entirely different (higher) number for qualified property.  Are the numbers labeled as 199A connected to code Z instead or as well?

Please let me know if you need further info or clarification on my question.

I'll be happy to scan and upload an image of additional info I have if it's needed.

Thank you so much for any help.

The code AH on Form 1065 Schedule K-1 is for "Other Information".  According to the instructions for code AH at this link, it can include certain specified information, or "Any other information you may need to file your return and not shown elsewhere on Schedule K-1".  So, my conclusion is that the K-1 preparer used that heading to give you general information about your K-1, including your box 20 code Z, but there are no AH, AA or AB amounts for you to enter.

The numbers in the purple box are the part of the Section 199A amounts from the pass-through entity versus those generated by the partnership itself.

I appreciate your answer; however, the K-1 has an "A" with a number which I entered and a "Z" which has a number from the K-1 Statement A. The message I get during the final review indicates no value has been entered for Statement A. But I did. Very confusing.

Your answer is getting me closer to solving my dilemma. I have this Z in box 20 followed by a STMT.

There is a table on the STMT labeled "SECTION 199A DETAIL" near the top.

There are 10 rows and 5 columns to this table. Some have 0's in all the columns, so I am ignoring those.

In the PTP column all are marked 'NO'.

One of them has 4 in the column labeled "Section 1231 Gain (Loss) and all the other columns for that row are 0.

5 of them have non-zero entries in the column labeled "Section 199A Unadjusted Basis".

Could you please tell me how to enter all of these?

Thank you so much David!

The columns are the easy part, see the post above and you'll see lines on the "We need some information about your 199A income or loss" screen for both the "Section 1231 Gain (Loss)" and "UBIA of qualified property" (i.e., Unadjusted Basis) amounts.

The more difficult task for you is to "sort" the lines into the different "entities" being reported on your K-1.  Each entity must have a separate K-1 entered to capture the amounts for that entity.  And, if an entity has more than one type of income (box 1, box 2, or box 3) then that entity will need separate K-1s for each different "type of activity (income)" reported for that entity.

Hello.  I am using TurboTax for Business to enter a K1 1065 for a trust.  I did enter the "Z" in box 20, and left the amount blank. When I advanced, it didn't give me the option "We need some information about your 199A Income", that would allow me to enter the data.  My software is up-to-date and I don't want to manually enter these numbers on the form menu.

I am not sure if this is a software issue.

@Jeff78 You should see a checkbox for Schedule B1 when you are entering data from your K-1; check that box.

Yes, Community Champ tagteam is correct.  For TurboTax Business, the entry of a Form 1065 K-1 with Section 199A information is different that for the TurboTax Form 1040 versions.  To get the QBI entry screen to "open up" you check both the Box 20 line and the Section B1 (Qualified Business Income Deduction) line.