1/ How, what and where do I enter the info for section 199A information (code z) into Turbotax Home and Business (- second screenshot).

2/ I have already entered ordinary income and rental real interest income in 2 separate step-by-step entries into Turbotax. What do I do with the "Net Section 1231 Loss" number?

Enter the code Z when you enter the K-1 box 20 screen, but you don't need to enter an amount on that screen.  Continue on, and you'll eventually find the screen  "We need some more information about your 199A income or loss".  When you check the box next to a category on that screen, a place will open up to enter the amounts from the Statement or STMT that came with your K-1.  Note that there are lines for the Ordinary Income, the Rental Income, the Section 1231 loss, and the W-2 wages reported on your Section 199A statement.

The applicable category (or categories) on this screen (and the following "Let's check for some uncommon adjustments" screen, if applicable) must be completed in order for your K-1 QBI information to be correctly input into TurboTax.

To get back to the K-1 summary screen and find the Schedule K-1 to edit, click the "magnifying glass Search" icon on the top row, enter "k-1" in the search window and press return or enter, and then click on the "Jump to k-1" link to find the K-1 you need to edit.

Here are the "We need some information about your 199A income or loss" and "Let's check for some uncommon adjustments" screens where you enter the information from your K-1 Section 199A Statement/STMT: 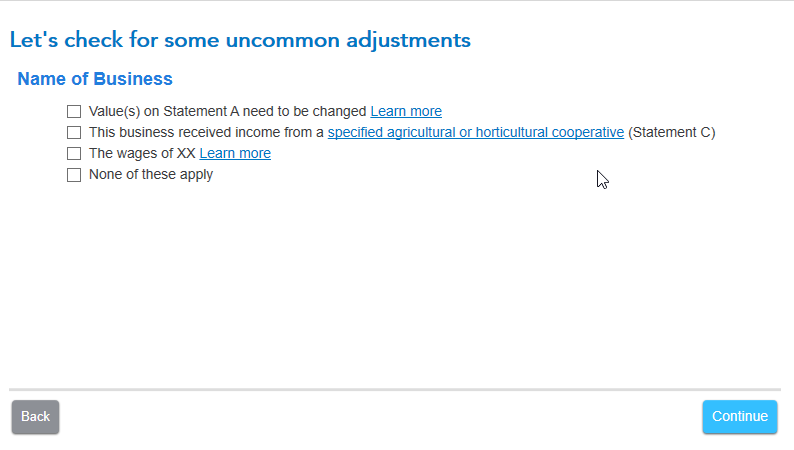 What if you have four companies listed separately on the statement to enter for 199A?  How do you enter them?  It doesn't prompt me to add any other companies?