In the online software, the final files always sho...

Sign in to the Community or Sign in to TurboTax and start working on your taxes
Announcements
TurboTax has you covered during Covid. Get the latest stimulus info here.
Turn on suggestions
Showing results for
Search instead for
Did you mean:

I found that going back to toggle between itemized and standard deductions in the Deductions
Topics:
0
2
50
Reply
2 Replies

Yes, you can force the program back to itemized deduction. 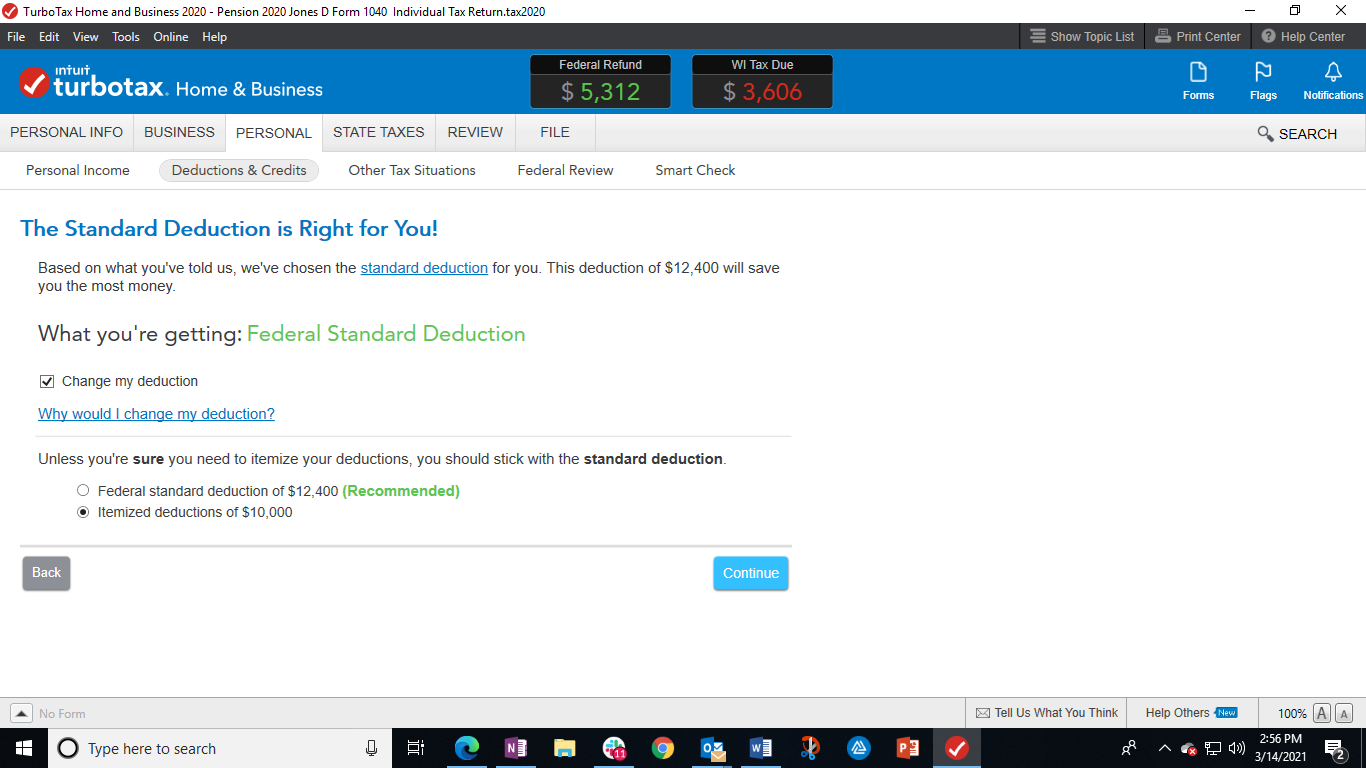 Unfortunately, your "expert" advice was insufficient to resolve the problem, but I did manage to resolve the issue leveraging some of the software user interface troubleshooting experience that I've gained over the years.

Here is what I had to do:

(1) I had to go to "Tools" and delete all of the "Charitable Donations" forms that I had entered detailing the multiple charitable donations I had made throughout the year. (This may have been the only helpful contribution of the 1 hour + support phone call we made to figure out the issue.)

(2) I then had to navigate to Federal > Deductions and Credits to reach the form that allows me to specify Itemized vs Standard deductions.

(5) I then had to navigate back to the Federal > Deductions and Credits to reach the form that allows me to specify Itemized vs Standard deductions. I then selected Itemized deductions from the popup option; this did allow the itemized value to take effect in the refund as I had expected.... but THEN I did NOT select Continue to proceed to the Care Act page because IF/WHEN I did (the first many times I tried) it would again, change my refund BACK to the standard deduction amount and it wouldn't take me into the Care Act page anyway (though it would note an error in my final federal check at the end of taxes to tell me that I needed to enter something into the 10b section).

(6) I then had to navigate back to my Charitable Contributions to ADD back in all of those forms/information that I had to delete in order to force the user interface to show me the Cares Act contribution page in the first place.

(7) I then went directly to try to check my federal tax return, as I had already entered all of the other relevant information in the other sections.

I can't have been the only person to have entered into this strange erroneous logic loop that forced standard deductions versus the itemized deductions which I originally had wanted to select.  There were many internet posts/comments/suggestions related to that $300 Cares Act fiasco, but none of them seemed to realize that (at least on the online version vs the desktop version) it forced the tax return into a standardized versus itemized deduction scenario. Also, there was little help for users of the online version vs the desktop version - most solutions centered around users needing to leverage the desktop version to correct line 10b to read "0" versus "$300" in the pdf version which does not resolve the fact it assumed a standardized deduction and not the itemized alternative (thus also not printing or providing the appropriate schedule A, etc for the tax return).