HELOC interest on loan used to invest in LLC I wor... - Page 2

Sign In
Announcements
TurboTax has you covered during Covid. Get the latest second stimulus info here.
Turn on suggestions
Showing results for
Search instead for
Did you mean: 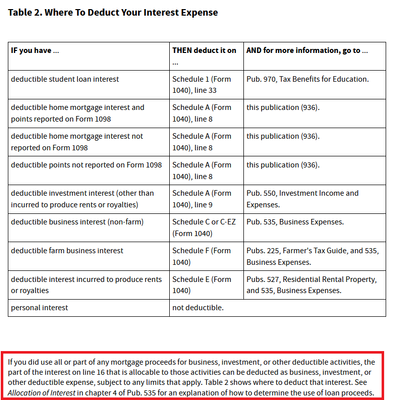 Example 2: In January 2018, a taxpayer takes out a $500,000 mortgage to purchase a main home.  The loan is secured by the main home. In February 2018, the taxpayer takes out a $250,000 loan to purchase a vacation home. The loan is secured by the vacation home.  Because the total amount of both mortgages does not exceed $750,000, all of the interest paid on both mortgages is deductible. However, if the taxpayer took out a $250,000 home equity loan on the main home to purchase the vacation home, then the interest on the home equity loan would not be deductible.

Example 4: The taxpayer owns a rental property free and clear and wants to purchase a home.  So he obtains a loan on the rental to purchase the home. Under the tracing rules the taxpayer must trace the use of the funds to their use, and since the debt was not used to acquire the rental, the interest on the loan cannot be deducted as rental interest. The funds can be traced to the purchase of the taxpayer’s home.  However, for interest to be deductible as home mortgage interest the debt must be secured by the home, which it is not. Result: the interest is not deductible anywhere.

here is where i still see the logic breaking down.  While I appreciate the language you pointed me to in publication 936:

If your home mortgage interest deduction is limited under the rules explained in Part II, but all or part of the mortgage proceeds were used for business, investment, or other deductible activities, see Table 2 near the end of this publication. It shows where to deduct the part of your excess interest that is for those activities.

if it's limited as part of the Part II rules, you can deduct the interest elsewhere and I agree with that.  But the Part II rules relate to the loan limits (e.g $750,000 now, $1mm previously, etc.) and not the requirements found in Part I.

"You can deduct home mortgage interest if all the following conditions are met.
• You file Form 1040 and itemize deductions on Schedule A (Form 1040).
• The mortgage is a secured debt on a qualified home in which you have an ownership
interest. Secured Debt and Qualified Home are explained later.

Note. Interest on home equity loans and lines of credit are deductible only if the borrowed funds are used to buy, build, or substantially improve the taxpayer’s home that secures the loan. As under prior law, the loan must be secured by the taxpayer’s main home or second home (qualified residence), not exceed the cost of the home, and meet other requirements."

is your position that if the taxpayer fail the Part I rules, it's okay, just deal with the Part II rules? if so, where is that in the publication?

The reason why I believe both the IRS example and the Example 4 from the link are not deductible ANYWHERE, is because they fail the Part I rules so the Part II rules are not germane.

In the original ask of this thread the taxpayer asked if he could use the proceeds of the HELOC to invest in the LLC and  deduct the interest.   Does he pass the Part I rules?  NO!!! (because of the font in red above).  That is the end of the story.  It's not deductible ANYWHERE.

Where does it say that if you can't deduct it on Schedule A (Part I failure) you are welcome to deduct it elsewhere? How do you otherwise logically  explain the two examples that are not deductible ANYWHERE?

I much appreciate it!

if you think my logic is flawed, please let me know and where it is flawed.

@NCperson I really have neither the time nor inclination to engage with you further on this subject. If you refuse to accept the fact that the tracing rules are rather well established and the language in the Reg itself, I sincerely doubt that there is much more that can be written that would persuade you otherwise.

I accept that tracing rules are covered in the regulations, but I do not accept they apply to the situations raised.  And I have two examples provided by experts indicating they do not apply,  One of those experts is provided by the IRS itself (and no one has stated that the IRS is just wrong)

so let's end the thread

sorry - I just found this link for others that may read this thread..... it clearly states that the tracing rules do NOT work for residential real estate interest as a result of the 2018 tax law changes.

(what the link states as 'as outlined above" are the Part I rules I quoted earlier in this thread.)

The following was copied and pasted directly from the link provided in the above post.

Even with the mortgage interest deduction substantially reduced and the elimination of home equity indebtedness under the TCJA, there may still be a way to obtain a deduction for the interest on the mortgage or home equity loan. If you were to take out a mortgage or a HELOC secured by your residence and used the proceeds for another purpose such as to fund trade or business operations or to purchase an investment asset, the interest could become deductible, subject to any limitations of that interest category.