This diagram may help to clarify some of the terms used with cryptocurrency and digital assets. 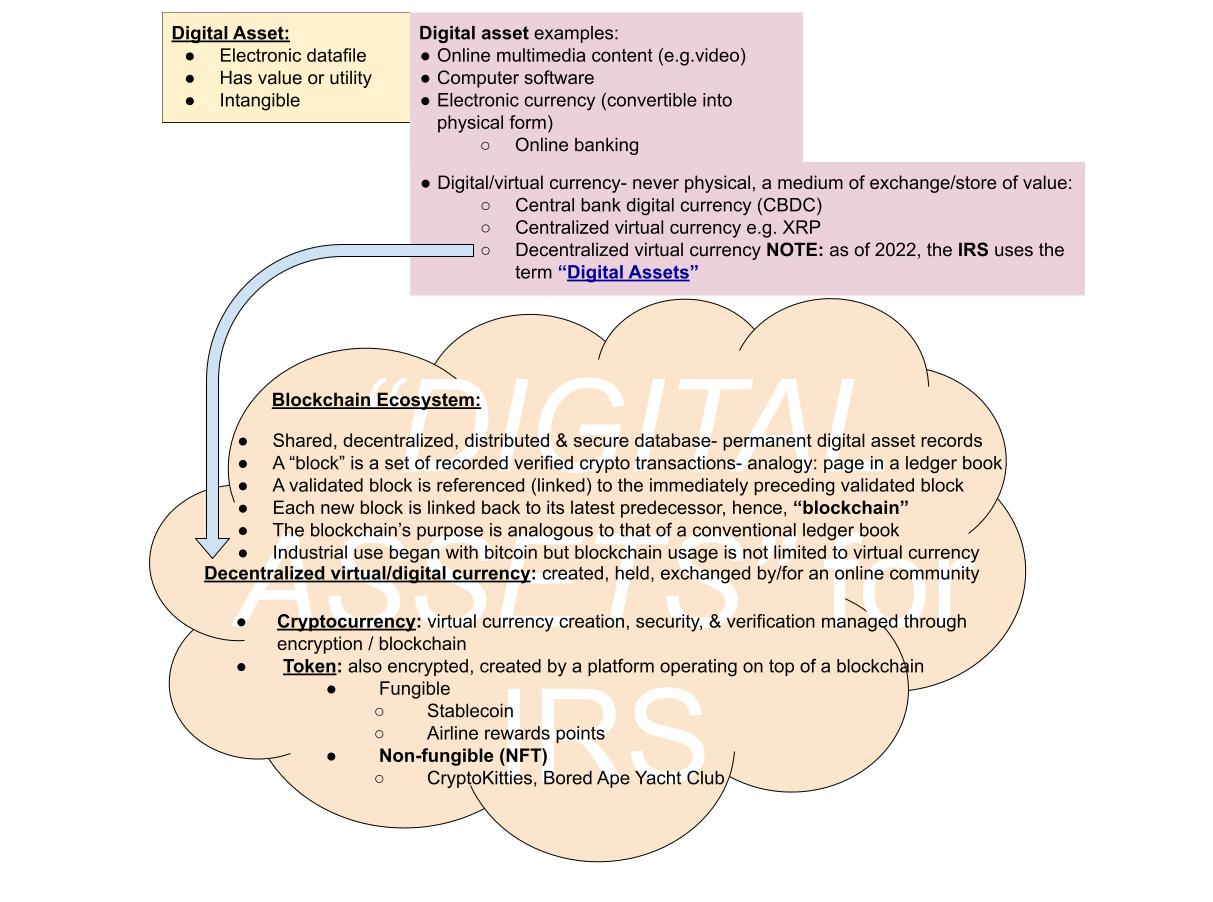 i. Cryptocurrency is a medium of exchange, which provides:

All cryptocurrencies reside within a blockchain ecosystem, and can never reside anywhere else, like in a bank account. Contrast this with an online banking system’s money, which can be converted into hard currency and back, via ATM machines or bank tellers. A blockchain recordkeeping system has some potential benefits over a conventional central database regarding security, autonomy (meaning few or no intermediaries), transparency, and community consensus.

iii. Cryptocurrency is a digital currency

Because cryptocurrency exists only in electronic format, it is a digital currency.

How is cryptocurrency taxed?

Terminology in this section:

Depending on the situation, cryptocurrency is taxed as:

What are the capital gain and capital loss tax rules?

In the United States a capital gain or loss from a property held for:

What is the cost basis of a capital property, including cryptocurrency?

Which cryptocurrency events result in capital gain or loss?

A capital gain or loss will result from the disposal of cryptocurrency:

What if there is a capital loss?

So, tracking and reporting these unused losses year to year for possible future use is important.

Why's cost basis so important, and what pitfalls must be avoided?

Having the correct cost basis is needed to determine the correct capital gain or loss amount, to report and pay the correct tax. So keeping records of all cryptocurrency deposits is really important.

Jean may eventually receive an enquiry from the IRS, asking if the capital gain has been under-reported by $100.

What is the importance of the choice of cost basis method?

If one holds two tokens of a cryptocurrency that were acquired at different points in time, they will likely not have the same cost basis. If a token is sold, what cost basis amount is used to calculate the capital gain or loss? Is it the first token (known as first in, first out, FIFO), the last one (last in first out LIFO), an average of the two cost bases (average cost basis ACB), the highest cost token (highest in first out HIFO), or by picking one (specific identification)?

As one's volume of disposal transactions increases, the required information gathering and calculations can become more daunting, exhausting and risky.

Using an automated cryptocurrency tax calculator is an option worth considering. One such option is described in the next section, What's Intelligent Tax Optimization?

Are there any nontaxable crypto events?

What if cryptocurrency is lost or stolen?

There's no available tax deduction for losses from lost or stolen cryptocurrency.

Cryptocurrency compensation received from proof of work mining or proof of stake mining:

When a reward is received from staking delegation, the tax treatment depends on the type of reward. If the reward is for:

A hard fork, on its own, isn't a taxable event. If the hard fork is followed by receipt of new tokens, the tokens are taxable as ordinary income based on the fair market value at the time of receipt.

Tokens received from an airdrop are taxable as ordinary income based on the fair market value at the time of receipt.

DeFi tries to mirror financial services like lending, borrowing, and earning interest, on a blockchain with no intermediary such as a bank. Existing ordinary income and capital gains rules can be applied to basic DeFi transactions. Tax treatment of more specialized DeFi arrangements can be reviewed at Decentralized Finance (DeFi) is red hot, but what are the tax issues?

A DAO may initially raise capital by receiving fiat currency (money) in exchange for its native token. It may invest in assets if there is consensus of approval.

When cryptocurrency is received from a DAO in exchange for goods or services, or via promotion upon a DAO launch, the cryptocurrency received will generally be taxed as income, similar to the general case when there's no DAO involved, say, as payment received for goods and services provided, or from air drops.

How are stablecoin and NFT’s taxed?

In 2022, the IRS clarified its position: cryptocurrency, stablecoin, and NFTs, are all digital assets, subject to the same tax treatment. See Digital Assets for more information.

1099 forms in general are intended for disclosing non-employment income. Currently with cryptocurrency there can be inconsistency in how and when the forms are used, and the completeness and accuracy of the information they contain. Note: regardless of whether one receives a 1099 form, one is required to accurately report all cryptocurrency income to the IRS.

Form 1099-B is issued by traditional investment brokers and exchanges to report a client’s individual securities disposals and gains or losses. Currently, some but not all cryptocurrency platforms issue this form.

Form 1099-B contains potentially useful information for reporting cryptocurrency disposals, including the cost basis. One must use caution; see the prior section Why's cost basis so important, and what pitfalls must be avoided?

Form 1099-K is traditionally used by payment processors such as credit card providers. It's used by some cryptocurrency platforms, although that is not necessarily the form’s intended purpose.

Before 2022, it was required that a 1099-K be issued to a person if their total transaction volume on a given platform was over $20,000 and if the total number of transactions was over 200.

These annual thresholds were set to change so that a person with over $600 in volume, regardless of the number of transactions, would be required to be issued a 1099-K. This threshold change was initially slated to take effect for tax year 2022.

An IRS announcement in late December 2022 delayed the threshold change for one year, to tax year 2023, for almost all cases.

Form 1099-K shows the gross total of all transactions, both taxable, and nontaxable, on a given platform. For income tax purposes, each transaction needs to be reported.

Form 1099-MISC is issued to indicate total miscellaneous income. It's used by some cryptocurrency platforms to indicate other income of more than $600, from cryptocurrency staking, rewards and other sources of income. It doesn't disclose individual income transactions and it has no information about gains or losses. The individual income transactions must be imported or uploaded into the tax return software to be reported as either: other income if not self-employed, or as self-employment income if self-employed.

What is Intelligent Tax Optimization (ITO)?

ITO is a crypto aggregator within the TurboTax application. It helps make cryptocurrency tax filing easier, and here's how.

ITO is able to:

NOTE: what follows is one possible example of how ITO can work, shown here for illustration purposes. Depending on what types of crypto transactions you may have, the following illustrations might not be exactly like what you would see in your TurboTax experience.

The ITO journey in TurboTax starts at the Wages and Income section in TurboTax: 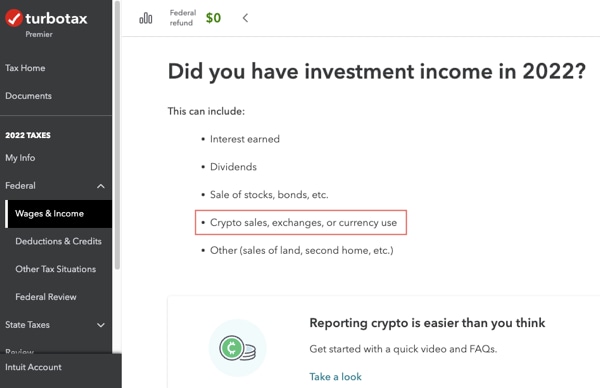 ITO will ask you some questions.

The first question is whether you had any cryptocurrency income in the year. You continue with ITO only if the answer is Yes.

Answers to these questions will let ITO dial in on your individual situation:

Next, ITO will advise you that: 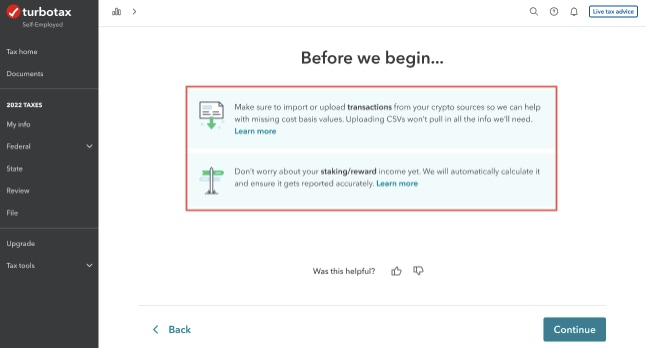 Next, you will be asked to identify your exchange, wallet or blockchain, either by: 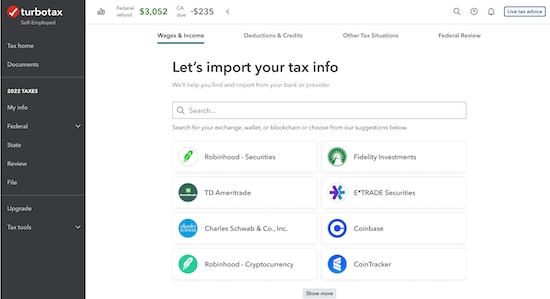 Next, ITO will ask you to login to your crypto account.

Then you'll see this pop-up when ITO is securely importing your tax data. When it’s done it'll close your crypto account.

Once the data transfer is done, ITO exits from your crypto account, and you'll see that your data import was successful:

You’ll add your other accounts if you have any, and you’ll indicate when that’s complete. Note: it's important to add all your accounts at this stage, so that ITO has a complete picture before it processes your data:

If you have any taxable transactions, you'll land on a transactions review page. Transactions that ITO wants you to pay special attention to will be flagged with an orange icon.

If there is a pencil beside an orange icon, you can select the pencil to review and edit that transaction directly.

If, as we see here, an orange icon indicates there's ordinary income to be reported, we'll see how to resolve that later. 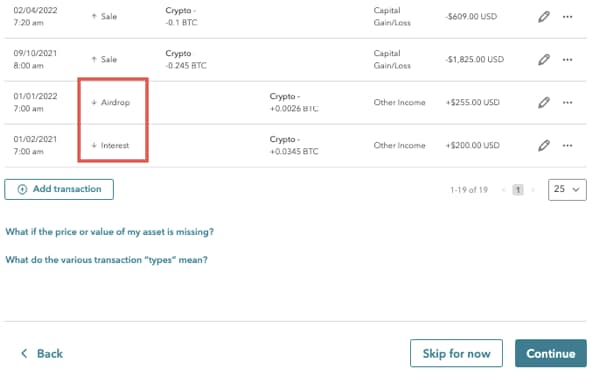 Some possible issues may be (but aren't limited to):

After any revisions to taxable transactions are complete, ITO may ask you if you received a Form 1099 that might have other income transactions. For this example we will indicate that no form was received. 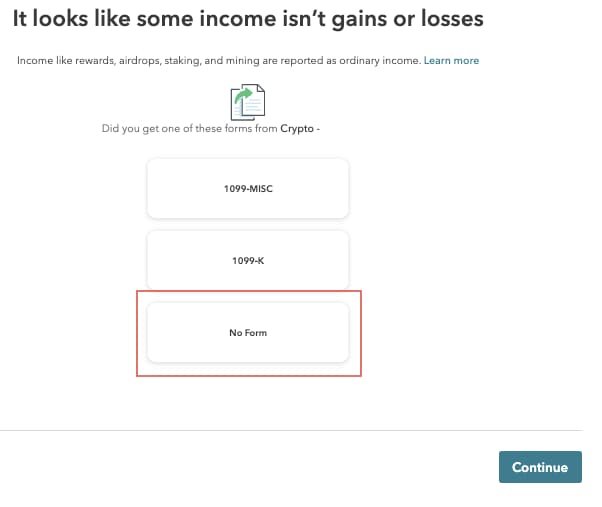 Some types of other (ordinary) income include:

Note that TurboTax will guide you through these other income transactions from an income page outside ITO, later. 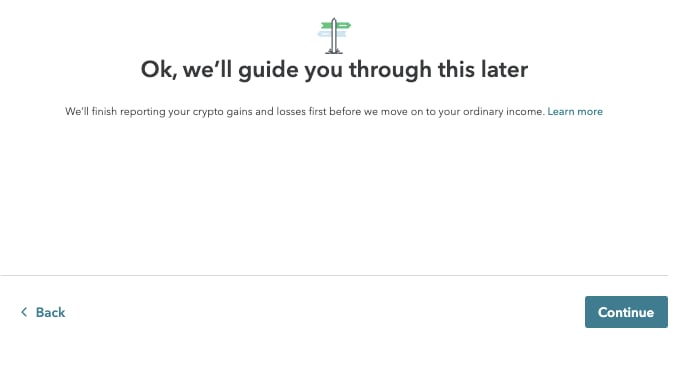 After selecting Review, you proceed to review your gains/losses tranactions. 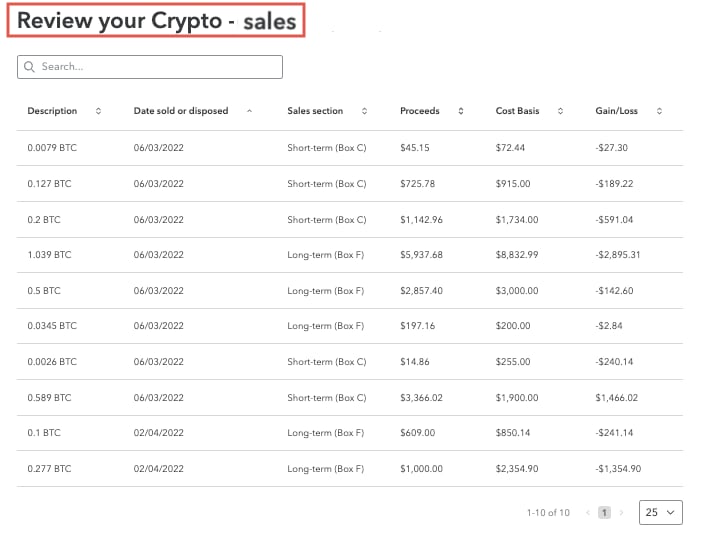 After the review, your capital gain/loss total is now displayed: 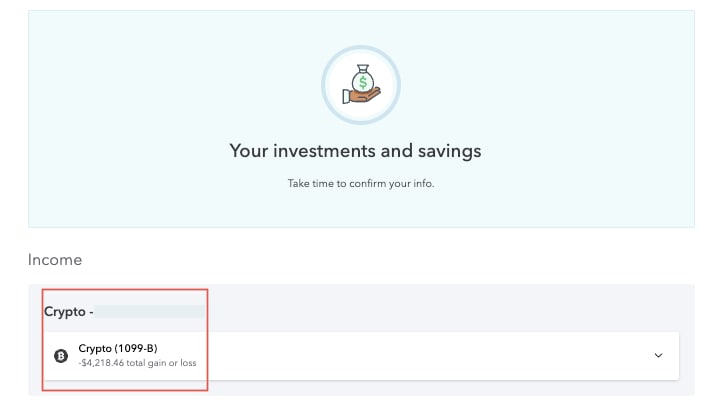 Next, you could select How was my capital loss/gain calculated? to see how the total was calculated. But instead let's select Next. 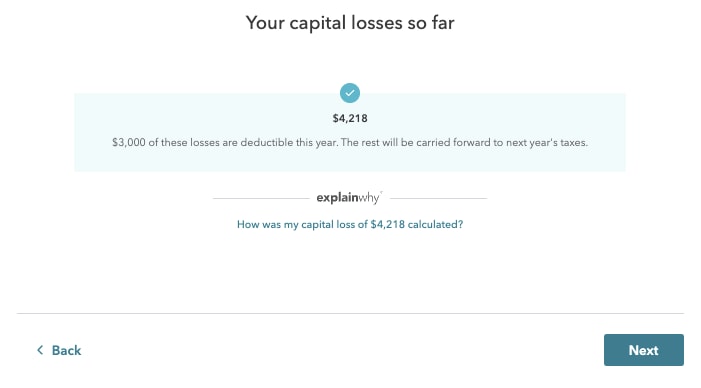 After having selected Next, we arrive back at the income page outside ITO. Recall that ITO had indicated any issues with other income would be addressed later. Let's do that now. 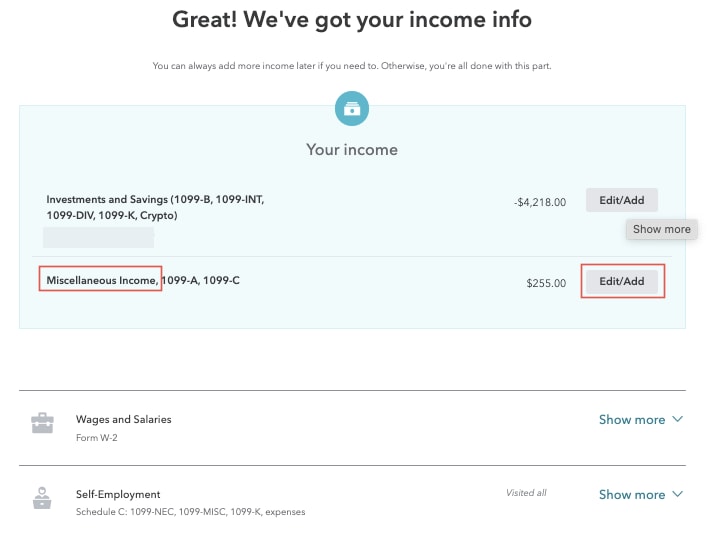 Next, at the Let’s Work on Any Miscellaneous Income page, select- Other reportable income: 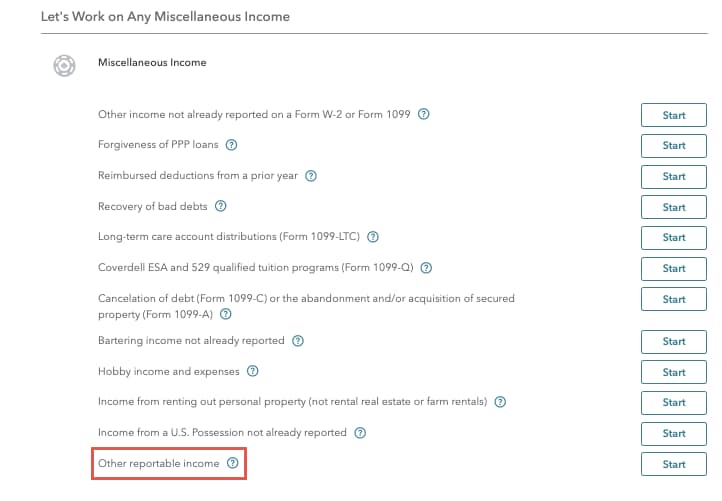 You may recall when we were at the Review these crypto transactions page, ITO had previously identified a $200 transaction for crypto interest income. We need to add that transaction now to include it in other income.

Now, provide details of the crypto interest transaction that needs to be reported ($200 of interest income):

Your other miscellaneous income transactions are now summarized for you:

And now all your various types of income are summarized:

The transactions needing review are now complete, so we select the Done with income button, and TurboTax will move on to Deductions & Credits.

ITO has automatically loaded all of the income information into the right places on your tax return and related forms.

This concludes our look at the TurboTax Intelligent Tax Optimization experience.